"We will raise our banner to the sky,
and though loudly blows the gale,
We will lift our flag on high!"
lyric from Tufts University

"By the Sword We Seek Peace, but Peace Only Under Liberty"
logo from the flag of Massachusetts

Flying the US Ensign Proudly

There are reams of flag etiquette pages on the web that describe how the US flag should be flown above all others, however, there is one allowance that is rarely referred to in the literature but commonly seen. According to one of our books we used at Harbormaster Academy, Chapman's Piloting Seamanship & Boat Handling (copyright 1999 page 587) "the flagpole is considered to represent the mast of a vessel, and the peak of the gaff, if one is used, is the place of honor from which the U.S. ensign is flown, just as it would be on a gaff-rigged boat."

This has caused some confusion "because proper flag etiquette requires no other flag be flown above the U.S. ensign, and obviously another flag, such as a yacht club burgee at the masthead, will be higher than the U.S.flag when the latter is at the gaff." According to Chapman's "this is entirely proper because"above," in flag etiquette, means "directly on top of"." Also, it should be noted that the block at the top of the gaff is conspicuous higher (tilted upward) than the opposing blocks at the ends of each yard.

The illustrations above show the standard mast and pole displays as if you were ashore facing seaward.

Note that the flags should be flown from a conspicuous hoist; that on national holidays and days of special yachting significance you may fly the flags of the International Code. "Flag fraud" is often noticed where flag pole operators or owners have a poor working knowledge of flag etiquette and become guilty of misusing appropriate halyards and settings, some seen setting the storm warning at the truck (the burgee position) or other misrepresentations. It is critical that storm signal flags shall be flown from the left yardarm facing the sea while any other foreign or state ensign shall be flown from the right yard arm facing the sea.

Oh yes, one last thing. The flag should be hoisted briskly, but lowered ceremoniously. 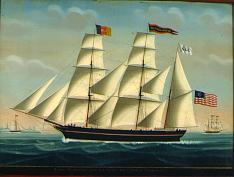 An example of U.S.ensign flown from the tip of gaff on a sailing ship the American Bark MANUEL ORTIZ (note: the ships pennants are at the mast heads and are not "directly on top of" the U.S. ensign)

Massachusetts Flag ("By the Sword We Seek Peace, but Peace Only Under Liberty")