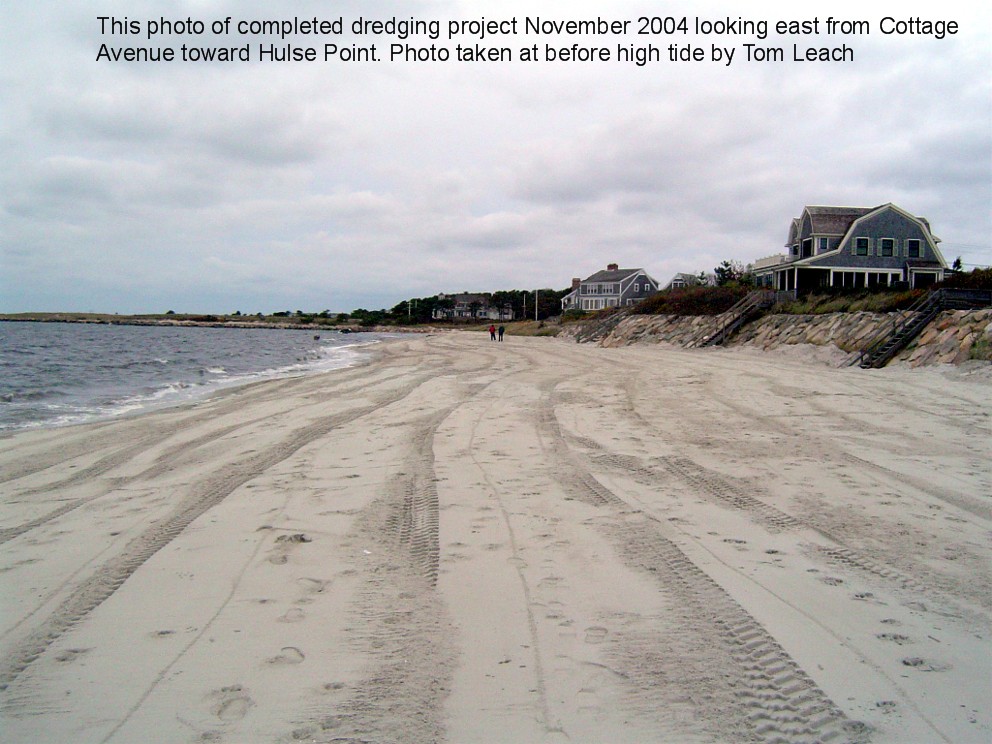 The above photos (figures 3-5) demonstrate the rapid loss of sand off the project disposal beach due to erosion from waves and littoral drift in the Wyndemere Bluff area of Harwich Port. Within 12 months after the completion of the project by the Barnstable County Dredging Department more than 8,000 cubic yards of sand had been eroded being blown and moved down the beach by wind and waves, or transported back to near shore sandbars. More importantly, these local beaches suffer from lack of the recruitment of new material from the west which is cut off by the Allen Harbor jetty system. This pattern repeats itself along the Nantucket Sound shoreline from Falmouth to Chatham. Left without a sand source, this beach is unstable and is expected to lose sand intially at a rapid rate to the frustration of property owners. After dredge material has been placed, the loss of beach is also due to the shift of its slope as it accommodates a proper angle of repose. This may be due to a "shelf" on the low water side of the beach disposal project which is quickly shifted and eroded by wave and tidal action.

Efforts of local beach associations and home owners to stabilize and hold sand through the use of beach grass planting and snow fencing to capture wind blown sand has had limited success in this area. Undercutting of the beach is acute during periods of extreme tides coupled with southerly driven storm wave in this area. Further, revetments along this armored coast prevent nourishment of the beach with bluff material.

The Allen Harbor Dredging project for 2004 was completed November 4, 2004 by the Barnstable County Dredging Department. Using an Ellicott Series 670 "DRAGON" Dredge named CODFISH the County dredge team deepened the Allen Harbor entrance channel to its permit control depth of 6' at 100' width over 2800' by pumping 12,000 cubic yards of sand to nearby public and private beaches as determined by the Board of Selectmen. The Harbormaster allowed an additional 2,000 yards of material to be taken to reach the controlling depth. The cost of the project $66,000 at $5.55/cu.yard is being paid for from a series of articles called the Town dredging reserve fund. Material in this project had not been placed on the beaches east of Allen Harbor since 1998 when 2,417 cu.yards was placed at Wah Wah Taysee Road beach.

Increase in the frequency of beach replenishment would have a positive effect on holding a beach in this area, however, it is unlikely that the beach will ever stabilize due to impacts of long shore jetties which trap and redirect sand back out to sandbars, further sand source to replenish the beach has been cut off where the bluffs have been stabilized or armored by revetments.